It might seem strange to talk about death during the holidays, but I find it a well-suited subject for the darkest time of the year at the Northern Hemisphere. This is the time to go inward, to contemplate, to appreciate the stillness.

Loulou Maya is now 4,5 years old. She has been worried about death for almost half a year now. Nothing has happened that triggered this worry. Nothing that we are aware of, at least. Nothing like the death of a loved one. My grandmother did die in September, but Loulou’s worry and preoccupation with death had already started  couple of months before. So from spring till now she has had quite a few tearful evenings, asking me when will we die, if we can die on the same day, if we will die with age order (first her dad, then me, then her, then Vera Jo), if we can arrange it so that she dies first and will I take care of her grave then? The last couple of months her angst has eased but she still asks every single night how many days do we have till we die. I will tell you what I reply in a bit. First, some background information.

Me and Nikos have always been on the same page when it comes to treating children with the respect you would treat an adult. So we believe you should not lie to children but talk to them with honesty and explain how things around them work. I still believe we should not lie to children, but I ‘ve reconsidered when it comes to our hard-core rational approach.

When Loulou Maya was 2 years and 9 months old we took her to an exhibition about ancient Egypt in Leiden. She asked about the sarcophagi and we told her that ancient Egyptians buried their dead there. She was pretty cool about it all, asked if our favorite Greek composer, Chatzidakis (that we ‘ve been talking about a lot) was also buried in a sarcophagus and if we will be buried there when we die. We were oh-so-proud about our daughter’s matter-of-fact approach to death. Oh, the ignorance… You see, at this age (average) kids are not yet mentally developed enough to actually grasp the concept of death. That probably doesn’t come as a surprise to you and you just think that we are total idiots. You might be right, but people who know Loulou Maya can somewhat understand why we were confused. You see, she has always been really good with words. At that age she made long sentences, used big words and talked about abstract concepts. Because we did. We didn’t realize that the fact that she was parroting our vocabulary didn’t mean she was ready to face existential questions.

Fast forward about one and half years later and her brain catches up. And she gets terrified. Suddenly she is very sad about dead birds or crushed snails. She is worried about people getting sick, about what comes after death. We repeat our mistake and when she asks we tell her what we think: everybody could get seriously sick and die. Eating healthy and exercising does help a ton. But there is no way to know when you will die. Plus, we don’t believe in Heaven or Hell but in a big pile of compost. Was she thrilled with the idea of going back to Mother Earth and helping a tree grow? Nope. Not impressed at all. Still we were of the opinion that life is hard and hiding the truth from kids doesn’t help. So I would hold her as she cried and tried to comfort her by focusing on all the wonderful things we will experience till we die.

Luckily I have very good friends who talked some sense into me. Knowing that both me and Nikos are over-thinkers and over-analyzers, they decided to save our poor child’s sanity but telling me that I should really cut back on all the information. Not lie, but only reply to what the child asks. Not too much information. The thing is, we ‘ve raised a curious kid. She is not satisfied with short replies. ANd vague replies won’t do either. But keeping replies short did help somewhat, as it took LM more questions to get the info she wanted. The sad and hard, but true info about life and death. During that talk with my friends, P. suggested I could wear a necklace and tell LM that I won’t be hurt because it protects me. She immediately took it back, thought it wouldn’t work with LM, that she would see through it and I also told her that Nikos (being the hard-core rationalist in our house) wouldn’t like the idea. Well, turns out her idea wasn’t bad at all.

Fast forward to today. During the last month Loulou Maya changed school (more on that maybe on another post). She is now going to a Waldorf school (inspired by the educational program and ideas of Rudolf Steiner). Now, I know that Steiner is being as much-loved as he is being hated. Let’s leave the controversy aside for a bit. Before we decided to change school, we obviously did a lot of reading on his philosophy. He talked a lot about the first seven years of a child’s life and their magical thinking at that age. Steiner is obviously not the only one who has written on the topic. Developmental psychologists agree that up until the age of six or seven children have trouble telling apart reality from imagination. That’s why so many kids are afraid of monsters (LM included) and they still do, no matter how you try to reason with them that they don’t exist.

When kids have such fears (be it of death or monsters) the way to help them process and deal with them is not through adult, rational thought, but through magical thinking. My friend P’s idea of a protective talisman can work great with kids. That’s the reason why monster sprays work. And that’s why the wooden sword my dad made for her works much better to keep monsters away, than my reassurance that they are “just” in her head.

LM charging her monster-fighting sword under the full moon, as per grandpa’s instructions.

But let’s go back to the fear of death to see how magical thinking can help with it.

Stories are a great way to use magical thinking to introduce a hard concept. I ‘ve found quite a few books in Dutch, English and Greek that deal with death and I’ll write here a short overview for each one of them, as I think they are all helpful one way or the other to help children process what death is all about. Life And I, A Story About Death by Elisabeth Helland Larsen and Marine Schneider

An amazing book we found today at the National Museum of Ethnology in Leiden. We went there to see an exhibition on Bali, where a lot of information was about Hinduism, cremation of the dead, re-incarnation and the like. The museum has also permanent exhibitions about other cultures and civilizations and big part of it are different religions and the ways in which they deal with death and different rites of passage during life. We haven’t been to the museum since the whole “fear of death” phase started so I was a bit scared what all that information would trigger in her -now older and expanded- mind. So that book was perfect.

It personifies death as a girl with emerald eyes and flowers in her hair. Life is personified as a girl wearing red and has a black flower in her death, which Loulou Maya noticed very quickly, noting that there is a bit of death in life and the other way around. The book is no-nonsense. It talks about how Death visits old people, children, unborn babies, animals. But how this she does so full of love and compassion and how her role is necessary to make room for new plants and animals and people and ideas. And how there can’t be life without death. An excellent book. I can’t recommend it enough. The illustrations are wonderful too.

We read it twice on the bus on the way home and Loulou Maya was enchanted by it. Her new theory is that when we die, we ourselves become part of the body of the beautiful girl named Death. I love it. 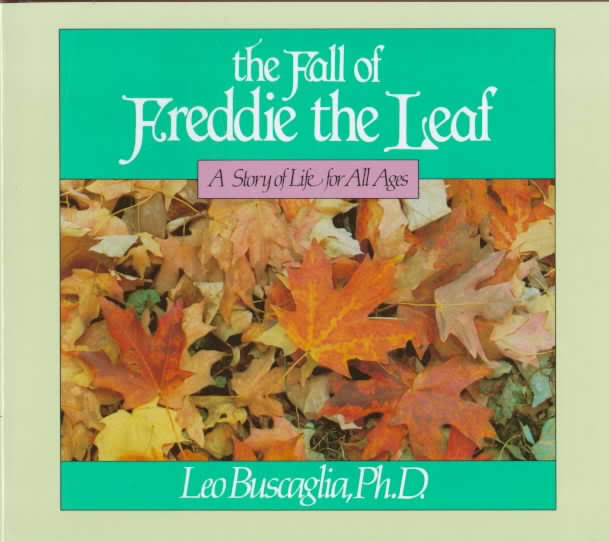 The Fall Of Freddie The Leaf, A Story Of Life For All Ages by Leo Buscaglia

An oldie but goodie, this one was read to me and my brother by my mom. Apparently I wasn’t the most chill of children either (and there are many stories to be told about my fear of monsters). I read it to Loulou Maya recently after my mom reminded me about it and helped a lot. It talks about concepts such us our experiences shaping each and every one of us in different ways, about people’s different reactions to death, about the fact that the death of a human doesn’t mean the death of humanity and the death of humanity is still not the end of life. 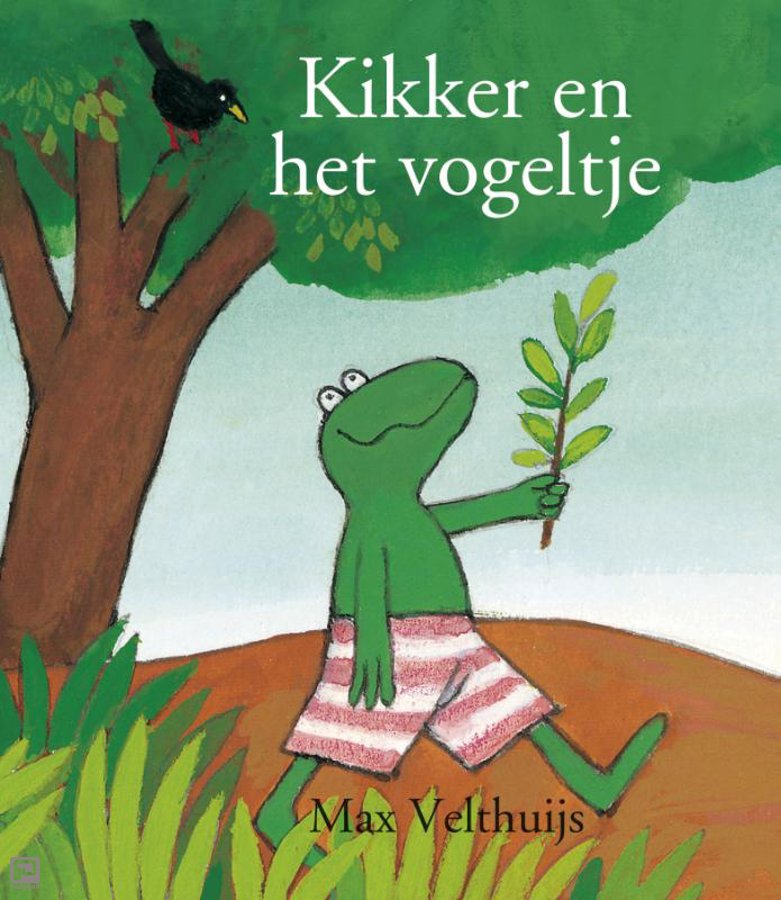 Books about the beloved Kikker (aka Frog) have been translated in many languages, but I can’t seem to find an English translation of this one. Still worth mentioning for the Dutch-speaking readers of the blog. In this book, perfect for the youngest kids, Frog and his friends find a dead bird. The wise one of the company, the rabbit, explains that the bird with not fly or sing or eat anymore and they need to bury it. They do and they hold a little ceremony, putting flowers on its grave, if I remember correctly. And then, as it is a sunny day, they go ahead and have a walk and play around and enjoy life. Because life goes on.

That book hasn’t been translated in English yet, but it is worth mentioning for the Greek-speaking readers. A wonderful book with charming illustrations that describes the way too siblings experience their grandfather’s dementia and eventual death. A tender look through the children’s eyes, reminding us that those who we love will always live in our hearts and that it’s the everyday moments that will be our most precious memories when they are gone.

This one is lovely but a bit vague. It’s the story of a boy that visits an island with his grandpa and then the grandpa decides to stay on the island while the boy goes back home. It is a metaphor for death and separation but I ‘ve come across quite a few adults online who don’t believe the grandpa actually died, which makes me wonder if it would be confusing for children. My dad has bought it, both he and my mom have this bizarre way of dealing with death by constantly talking about how and when they might die and their prefered way of burial. Excellent conversation starters (not).  The link on the title is of a video of the author reading the whole book, so go and see what you think for yourselves.

There are a couple of interesting articles on children’s books that deal with death and loss over at Brainpickings. I haven’t read the books myself but they do seem like excellent choices, depending on your kids age. Have a look here and here.

So back to the start, what do I reply to Loulou Maya when she asks me how many days are left till we die? I tell her that no one knows, but hopefully, if we take care of ourselves and each other, it will be thousands and I ‘ll try to make them all count.