Long time no see (it’s not even funny any more, I know I have to come up with another opening sentence). Has the holiday spirit made your days jolly and bright? Here in the Netherlands most people celebrate today Sinterklaas, a holiday mostly know internationally for the racist aspect of an old, white man on a horse being helped by a bunch of black helpers, called “Zwarte Pieten”. The majority of the Dutch insist that there is nothing racist about people going around with black face make up and that it is “just a tradition”. The last couple of years there have been protest about this topic with little coverage by the media and in some cases protestors were even made to go home. Some media outlets have chosen to represent Pieten, Sint’s helpers, with shoot marks on their faces or even using different colors of paint (an unsuccessful mix of the Sint tradition with the gay pride, I suppose). Anyway, the point is  -apart from the fact that this IS a racist tradition that needs to go- that Sint has his birthday today and people get their kids gifts (from the Sint). Now, AFTER the Sint’s birthday, the Dutch are allowed to put up their Christmas decoration.

Now, we are Greek living in the Netherlands so we cheated and have our tree up since last week. I need to admit here that I hated Christmas trees as a child, mostly because of how sad it was to put everything away once Christmas was over. Since having my own child, the last three Christmases, we put up a tiny Christmas tree but this year, maybe because we have one more kid, I really felt like getting a proper, big one. Our Christmas tree is a fake one, mostly because they are cheap and I would hate having to sweep the needles every day. Not that I know how that is. My wise mom always chose for a fake tree too. Not particularly environmental friendly I suppose, using up non-renewable resources to make plastic trees, but we compensated by having very environmental friendly ornaments this year. Which -after this very long introduction- brings me to the actual topic of this post.

So this year I searched pinterest with fancy key-phrases like “keeping kids occupied with DIY ornaments” or “child-safe ornaments” or “DIY ornaments with kids”. Many ideas popped up and I chose the easiest ones to implement. Here is what is on our tree:

Brown ornaments: 1 cup flour, 1/2 cup cinnamon, 1 cup salt, enough water to make a soft clay.
Orange ornaments: replace cinnamon with 1/4 cup paprika. I used smoked, cause that’s what I had at home. I am sure plain one would work as well.
Yellow ornaments: Replace cinnamon with 1/2 cup turmeric.
You can also make white ornaments with just flour and salt and make leaf imprints on them. That’s for when our kids will be older and classier though.

Here is a close up. Please note that the ornaments are here still wet, so not air- or oven dried. Their colors fade signifficantly after drying.

The texture of the clay is very kid-friendly and easy to cut with cookie cutters. Just sprinke the surfaces liberaly with flour if things get more sticky than you expect.

You can see that as the ornaments dry, teh salt seems to come on the surface and they look whiter. At least that’s the case if you dry them using the oven (at 50C for a few hours). 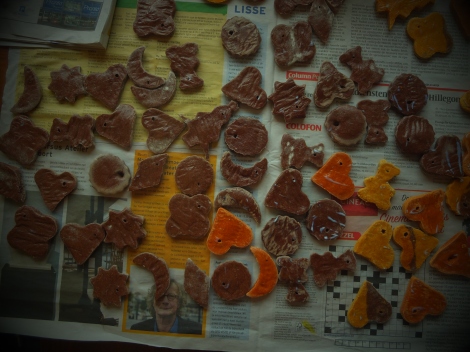 Don’t forget to make the holes before you let them dry. A pencil works well for that job and it makes holes big enough for a thin ribbon to pass through.

To bring back a bit of the gloss and intensity of the colors after drying, you can use mode podge or white glue or wood glue or a varnish. But then you have to make sure that your kids won’t eat them.

These ornaments pair well with acrylics too. Let your kids go wild!

My daughter always thinks of me when she plays outside at the kindergarden. She shows her love for me by collecting huge branches and insisting that the teacher gives them to me when I go pick her up. I decided to honor those tokens of love and turn them into Christmas decoration as well, along with her ornaments. It didn’t turn out bad, me thinks. 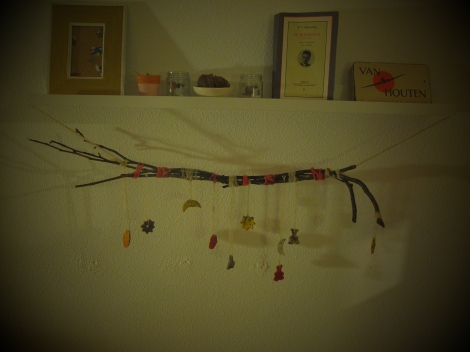 And here is a close-up of our tree, with all its ornaments, just to see how everything works together. I have to say, even though I love how the earthy tones of the ornaments blend in with the deep green of the tree, it might have been more fun if LM was not tired and decided to paint more with her crazy colors. Maybe next year, when VJ will be able to finger paint too. 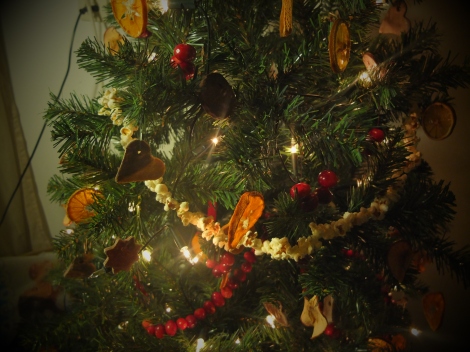