Let me be clear, dear readers, the title of this blog is purely satirical. I do love to scroll down and admire proper garden tours, with their little paths and carefully selected flowers and raised beds and color-coordinated garden furniture and cushions. My garden tour is more like a parody of those 😀 I am in love with our garden and we like things wild and free around here, from kids to plants, so I am not bothering with trimming our plants, so they look “nice and tidy”.

The main purpose of our garden is to let the girls see how nature works, how wonderful the change of seasons is and how magical the circle of life from sowing to harvest is.

Summer is here, even though most days it doesn’t look or feel like it, but I shouldn’t complain as the frequent rain keeps our garden watered without any effort. This is our first year living in a house with a proper garden and I was really excited about it. We moved here in January. The two stripes of dirt were just that: dirt. So I was looking forward to see what would sprout and bloom in spring. It turns out that the previous owners have left behind some gorgeous tulip bulbs that were blooming for about a month, around May, and now we have glorious hydrangeas blooming.

In April I planted some things as well, without putting any special dirt or any effort really, just to see what would come out. Tomatoes died quite fast, as the snails ate them all before they had time to grow. Spinach grew but it grew tall and went to seed too quickly, without giving large salad leaves. The other salad varieties got eaten by the snails as well. However, we have a few survivors! The giant you see here was the least likely to grow, as it was born from an old packet of seeds, that I don’t even remember when it came from. Nikos had picked it a few years ago but we never had the space for a squash plant. We also have potato plants, calendula flowers, spearmint and lemon balm. Both the potatoes and calendulas I had no clue what they were, till my parents visited. The calendulas were in a mix of wildflower seeds that I had bought, so I was super excited when my dad told me what they are. Calendulas are known for their medicinal properties and are great when it comes to healing and soothing the skin, so I am harvesting and drying them, aiming to make some infused oils or salves. You can also use the leaves to give some more color to risottos and salads or even make tea out of them. As for the potatoes, we just had a bunch in the pantry that had sprouted and threw them in the garden and covered them with old grass and weeds, when we cleaned the garden.

the squash climbing on the ivy 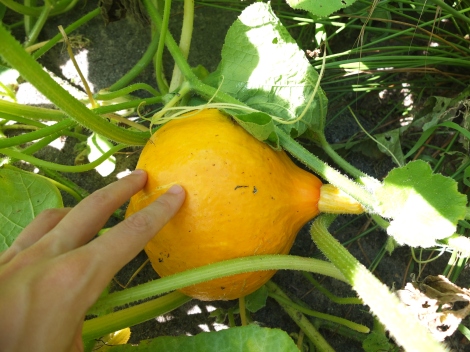 the biggest one of the squashes so far. There are tons of smaller ones as well. 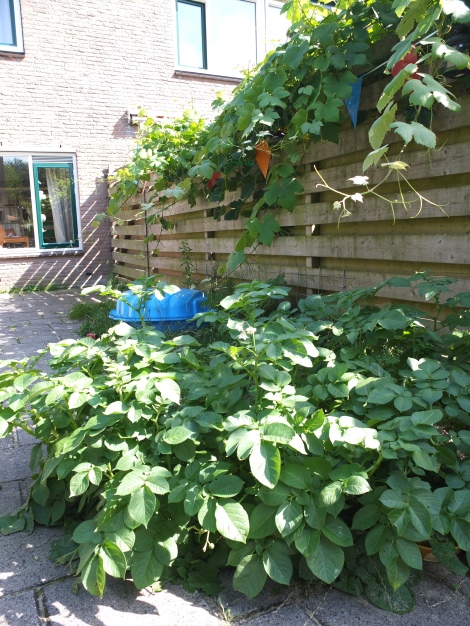 our potato plants. They have gorgeous white flowers with a yellow middle, but LM cuts them constantly to add them in her “soups” so I couldn’t capture any yesterday.

the calendula flowers. No open ones here, as I harvest them the minute they bloom. Their medicinal powers are supposed to be at their pick just when the flower opens.

the spearmint-melissa (lemon balm) pot. It’s a good idea to grow those in pots as they tend to take over the garden.

The squash plant is my favorite, I have to admit. I love how unruly it is and I love its big, bright yellow flowers. I have many memories of my grandparents stuffing the -very similar- courgette flowers with rice, along with tomatoes, peppers and aubergines. That food, called “yemista” in Greek (which literally means “stuffed”) is the most summery one there is. So I decided to recreate it in -let’s admit it- the most hipster way ever. 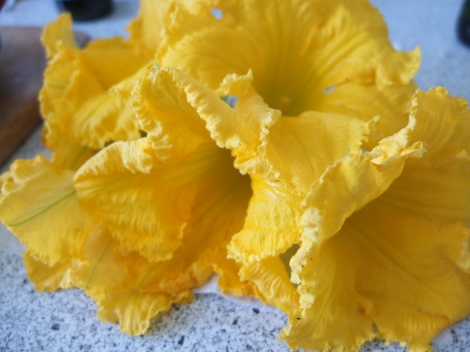 the squash flowers, harvested in the morning, when they are the most open.

washed, the inner part removed, and let to dry. 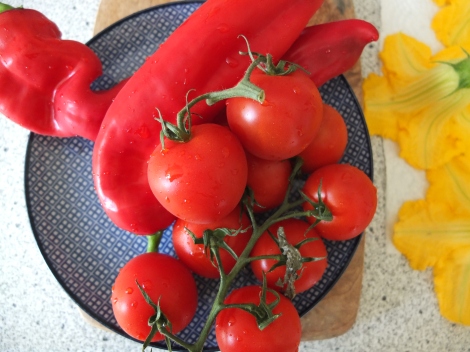 sweet red peppers and small, fragrant tomatoes join the flowers in the pot. 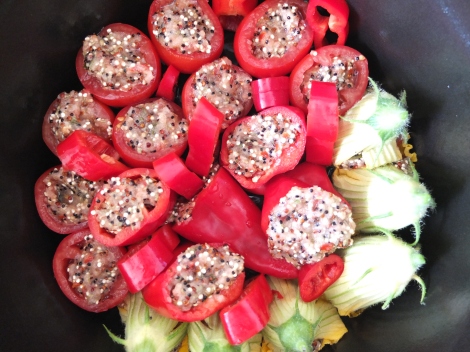 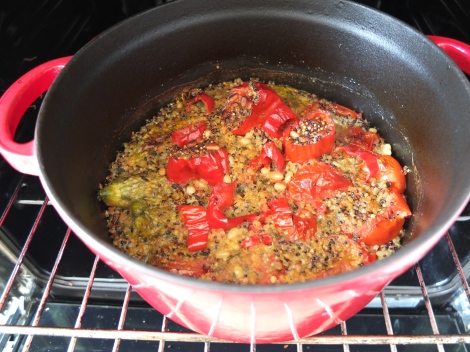 I made a cooling salad to go with it as well: just chopped up some cucumber and melon and dressed with olive oil, lemon balm, spear mint and a bit of salt and pepper. 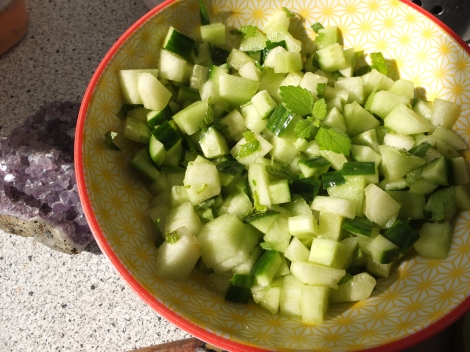 So what are you cooking this summer? 🙂

One response to “Garden tour and a squash flower recipe”