So, this past Tuesday I had my 6-week check up with the midwife, after giving birth to Vera Jo. I am now released from their care so I have graduated to the next level of being a mother of two. To celebrate that, I decided to make some time and write this post about tandem breastfeeding.

What is tandem nursing?

Tandem breastfeeding means nursing two kids during the same period of your life. The kids could be twins or siblings of different ages, as is the case in our family. Tandem feeding does NOT necessarily mean feeding both kids at the same time though. 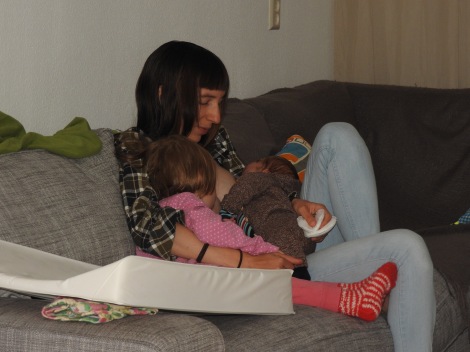 Ever since I had Loulou Maya and was lucky enough to have a very smooth breastfeeding relationship with her, I knew I would like to try tandem nursing, if we had another one. Having chosen for extended breastfeeding with Loulou Maya, I have done a lot of reading and joined quite a few groups focused on breastfeeding. On those groups the topic of breastfeeding during pregnancy and tandem feeding comes up quite often. So when I got pregnant last June, I was already confident I would nurse throughout the pregnancy or until Loulou Maya would decide to wean. When that pregnancy ended up in a very early miscarriage, one would think I would get discouraged and try to wean Loulou Maya before getting pregnant again. That wasn’t the case though, as I had researched enough to know that there was no way the breastfeeding caused the miscarriage. And the midwives confirmed it as well. So when I got pregnant a couple of months later, I was more determined than ever to keep my nursing relationship with Loulou Maya till the new baby would arrive and from then on, for as long as we desire. I had the instinct that it would help all three of us bond with each other and it would reduce sibling jealousy.

Breastfeeding during pregnancy wasn’t always easy. I had a couple of rough months because of pain and/or agitation towards the end. Those months I couldn’t stand Loulou Maya touching my other breast while nursing (many older kids like to twist the other nipple while nursing) and during the months that my milk was dry, her latch was really rough (or it felt that way) and she would leave teeth marks on my breast as well, in her effort to get some milk out. Luckily she was old enough to understand when I needed a break and she actually tried to improve her latch and stopped touching the other breast. Breastfeeding agitation is a very real issue for many moms, not only during pregnancy. My way of coping with it was to breathe deeply, count or focus my thoughts on happy memories or plans for the future. It helped take my mind away from the physical sensation. And luckily for me, the moment Vera Jo was born and put on my breast, along with Loulou Maya, the agitation was gone.

Is breastfeeding during pregnancy safe?

Disclaimer: I am not a medical professional. Therefore, before deciding if you will nurse during pregnancy, it’s a good idea to consult one. I do have an engineering diploma though, gathering dust in a moving box somewhere, which helps me do some proper research and understand the mechanics of how our body works. Based on my research, the short answer is yes: nursing during pregnancy is safe. It does cause your uterus to contract, but those contractions are no more dangerous than the ones caused by an orgasm. Which means that if your medical professional has advised you to avoid sex, because of a previous pregnancy with complications, you might want to avoid nursing too. But if you have no health issues and didn’t have a complicated previous pregnancy, then the contractions brought on by nursing can not send you to preterm labor. Now please keep in mind that most doctors are not familiar with how nursing works, let alone nursing during pregnancy or tandem nursing. It is much easier for them to suggest weaning “to be on the safe side”. Midwives, on the other hand, are much more likely to be supportive of your choice to nurse throughout pregnancy and also much more likely to be able to point you towards reliable sources of information.

The first week of tandem nursing: a word of warning

Now, here is where the time I spent researching tandem nursing has proven to be the most valuable. Here in the Netherlands the newborn is expected to lose up to 10% of the birth weight. If they lose more than that, intervention is required. Vera Jo was born a big, strong baby of 4 plus kilos. She had a tongue tie that was cut the same day she was born and she latched like a pro from the start. We could see and hear her drink and swallow. However, she was losing weight faster than the midwives would like and she was about to drop under the 10%. That’s when the midwife started suggesting that I pump and then feed her using a tube and a syringe, essentially force-feeding her the pumped milk, like a goose that needs to be fattened to make pâté. Had I not read that babies are much more efficient than pumps in sucking milk out of the breast, I might have followed her advice. But luckily I was able to ask the right questions. Why pump for a child that is obviously so good at sucking? What good is it to measure how much milk I can pump, since we know that babies can drink much more directly from the breast? The midwife admitted that this was true. But at no point did she indicate that I had a choice to refuse the use of the syringe-feeding kit. However, being a second time mom, I was calm enough to think clearly and asked “Can I take responsibility, deny the use of the kit and wait a couple more days?”. To which she replied yes. And then Nikos showed up and mentioned that maybe Loulou Maya’s drinking might have something to do with the weight loss. And then we realized that, as I was offering the breast in random order to the two girls, Vera Jo was not getting enough of the back, fatty milk and since Loulou Maya was so excited about the new milk coming in, she was probably drinking all the fatty stuff whenever she drunk. The midwife agreed that this could be it and if I promised to keep Loulou Maya off of the breast for a couple of days and Vera Jo would gain weight, she would leave me in peace. I did that (more or less – I still nursed her to sleep at night) and lo and behold, Vera Jo started gaining weight.

While midwives are really good at taking care of new mothers and newborns, they are not necessarily qualified to give you breastfeeding advice and guidance. That’s why we have breastfeeding consultants. What midwives want is to make sure they release you from their care with a thriving baby. They look at numbers and if the numbers don’t go up quickly enough, they will suggest some sort of intervention to make sure you have a growing baby in your arms, when they say goodbye to you. Understandable. But especially if you have very young midwives without much experience or who have not had children themselves, do yourself and your kid a favor and double-check with a lactation consultant before following their advice, especially when they suggest pumping.

That’s one of my favorite pictures of me and the girls. It shows the raw exhaustion but also the calmness that a tandem nursing moment entails.

Once Vera Jo was growing well and my milk came in, Loulou Maya increased her breastfeeding sessions as well. Before her little sister was born, she would breastfeed just once during the day, once to fall asleep at night and then once in the morning. Right now she nurses about a gazillion times a day and wakes up 2-3 times every night to drink as well. That is extremely common. In many cases the older siblings nurse more than the newborns and they even stop eating solid food for quite a while. That’s totally fine, since they get so many nutrients from breast milk, so no need to worry about that.

Here is a handy list of the challenges I faced those first weeks, along with the solutions we have found. Obviously there are no “one size fits all” solutions here, but they might inspire you to find what suits your family.

nursing Vera Jo while baby wearing in an wrap

I have read stories of the oldest child pushing the newborn off of the breast. I can completely understand that. For extensively breastfed children the breast is so much more than nutrition. It is comfort and closeness and their warm, safe, cuddly space. So when a new, drooling, wobbly creature that can’t even hold it’s head up shows up and starts sucking and spitting up all over your favorite place, getting mad sounds like the most logical reaction. However, I feel that if you talk enough with your older child about it, while still pregnant, you can transition to tandem nursing is a smooth way. Also, offering the older child choices and making them understand they have control over certain things will help. In our case, I always let Loulou Maya choose which side she wants to drink from (and encourage her to drink from the fuller breast, which she enjoys), if she wants to drink sitting or standing and in which room/bed she wants to nurse. I also don’t refuse to her, which makes her feel much less threatened by the newcomer. There have been many moments that she will hold Vera Jo’s hand while nursing, or that she will be caressing her hair or tickle her toes. And for Vera Jo having so many moments with her sister so close by help her recognize her. After all newborns can’t see that far and being and breast distance from each other allows them to observe each other and bond faster.

Would I recommend tandem nursing?

Yes. Absolutely. I find it an amazing, empowering experience that benefits all involved. However, it is demanding and comes with many challenges. I recognize I have been really lucky in terms of my children being really good at nursing from the start and me not having agitation. Most women are not that lucky and in that case the help of a breastfeeding consultant is crucial. Contacting La Leche League to find a certified center/consultant close to you and excellent first step. It is better to know who to contact before the challenge arises, so that you feel confident and prepared to face any issues.

One response to “Nursing during pregnancy and tandem nursing: a personal experience”