This post is not for the squeamish. Much like in the case of Loulou Maya’s birth story, I want to share with you as many details as possible, so that future parents feel informed and empowered to ask for the type of birth that best suits them.

Both times the labor process started Saturday night and I gave birth Sunday evening. That’s pretty convenient in terms of having the baby papa around, especially since we were both pretty horrible at checking our phones the weeks before birth. I would forget my phone at home or forget to charge it and N. would have his on silent, so no matter how much we tried to improve on that front, it just didn’t happen.

This second time around I was sure I wanted a home birth, if my health and the embryo’s health allowed. Though my experience the first time around was really good, I later realized there were a number of interventions I didn’t realize at the time. For example, my waters were broken when I arrived at the hospital, even though my contractions were strong and the baby was not in distress. I later found out this is a mechanical way to speed labor up, which is not something I have asked for. Once I realized this, I was no longer certain that the other decisions made at the hospital during Loulou’s birth were necessary or medically justified. And that’s when my decision to give birth at home solidified.

I was thinking of renting a birth pool, as you read so many great things about the pain relief a pool can offer. However, there are women who start throwing up the moment they get in the pool, others who get nauseous or feel too hot/cold, no matter the temperature of the water. Plus, I am not a patient person and watching someone fill in the pool while I am unable to help and get things done would only get me irritated. Of course there are MANY women with very positive water birth experiences and it is definitely something to look into, if you want a home birth or if you want to give birth at a birth center.

There are many ways to empower yourself when attempting a home birth. We had already followed a “Confident Birth” course the first time around, led by a wonderful doula, so we didn’t feel the need to do that again. I think that this sort of lessons are pretty useful for first time parents though, as they walk you through the physiology of birth and being informed takes away much of the fear associated with the unknown. Especially if you are an expat about to give birth in a new country, just like we were, following a birth course that explains the process in the new country will help give you confidence. Hiring a doula might be a good idea, especially if you don’t speak the country’s language or you feel you are scared of childbirth or you have birth-related trauma to deal with.

Back to the birth story now. 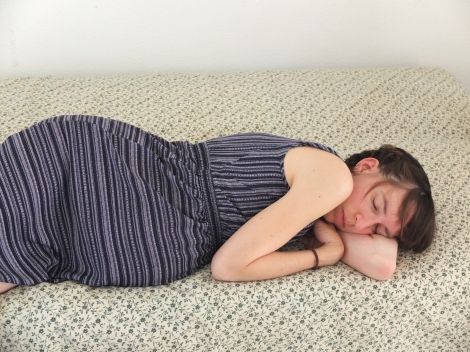 (that’s me at the beginning of labor, still able to take short 5′ naps in between contractions)

My waters broke at around 3:00, Saturday night. I just felt water running in between my legs, as if I had peed myself a little. I was thrilled, because I didn’t get to experience that the first time around. I knew that it could take a (long) while before real contractions would start, so I went to the bathroom, put on an adult diaper (get one for older girls, that way they have cute designs. You will still look ridiculous though) and tried to get some sleep, in order to have energy when I would need to push.

At about 8:00 I decided to get up and went downstairs to have coffee with my mom. Loulou was still asleep and so was Nikos. A bit later Loulou woke up. I was still contraction-free. Some more intense Braxton-Hicks, but that was all. So we had breakfast altogether and around 11:00 contractions started. They were irregular, coming and going about every 10 minutes. I soon realized they intensified and became more regular if I walked around. At around 15:00 they were about 5′ apart and that’s when the midwife had suggested we should call, as it would be my second birth. We waited a bit longer to make sure they stayed at 5′ apart and we called around 18:00. The midwife came with a student midwife (I was asked for my permission for that) and they saw I had good contractions but it could still take a while as I was at just 3cm. They asked me if I preferred them to stay till things picked up or if I would like them to come again around 20:00. I chose the later and they asked me to make sure to listen to my body and call earlier if I felt things pick up faster. By 19:30 I started feeling the baby’s head really press the cervix and contractions were no fun any more, so we called them and they were at our place 10′ later.

I could deal with the contractions with deep breathing techniques and by repeating quietly the affirmation “it’s not pain, it’s progress”. I had come across many affirmations, but this one felt like the most suitable one. Short and sweet and I was indeed in pain… ehm.. I mean progress, so it helped a lot. I was free to change positions and at some point I was standing, leaning against a table, letting gravity do its work. The midwives asked me if I wanted to give birth like that. I said yes and they started covering pillows with garbage bags and then towels and putting them under my feet. If I weren’t so focused on keeping my calm I would start laughing. I was laughing in my head, thinking “oh my God, they will just let the baby fall on the pillows. She will do bungee jumping with the umbilical cord”. At some point I was really tired, so I decided to get on the bed. I laid on my side, as suggested by the midwives, and I raised one leg, keeping the knee close to my head. This position really helped me and that’s how Vera Jo got to get out at 21:10. Shortly after the placenta was also out and as we had asked for the umbilical cord to be cut only after the placenta was born, we now have some great pictures of Vera Jo and her placenta being attached to each other. The midwives found it so much fun that at some point N. had to ask “can we maybe stop posing the poor baby with the placenta and let her drink?”. And we did. The midwife let me hold the umbilical cord and she told me to let her know when it would stop pulsating. That was so nice of her, ’cause I didn’t feel that things were rushed at all. Plus, it is just really cool to feel the pulse of the blood transferring from placenta to baby. The stitched that followed were not cool or fun or anything remotely positive though. Even though the midwives tried to save me with warm compresses and counter pressure, I still tore quite badly as Vera Jo was born 4.040 grams and 51 cm.

N. caught the baby and it was a very special experience for him. He said he found the whole labor/birth process much more relaxed and serene than the hospital one, because we were in a familiar environment and he knew how to help as he knew where everything was. My mom had the same feeling and said that it was almost cozy, as the midwives were wearing regular clothes and it felt like a bunch of friends came to help me give birth. Loulou Maya was also not scared at all. She was fascinated by the different positions I used to give birth and loved it when the baby’s head came out. She did freak out a bit when the baby latched on and she dared touch the other breast as well, but it was an hour past her bed time and a nervous breakdown should be expected. To be completely honest, she did actually say “It was a mistake, I got confused, I didn’t want a young sister!”. Luckily the next day she hopped down the stairs saying she was really happy to be a big sister.

All in all my home birth experience was a much more positive one than the hospital birth. I know that it could be the other way around, especially if I had to be transferred to the hospital at some point due to slow progress or complications or just being too tired to go on. So I feel lucky and grateful both to my good luck but also to the team of midwives and my own support team, namely N., my mom and even Loulou Maya.

P.S.: I am planning to write two more posts on the home birth topic, one on having older siblings attend the birth and one on home birth essentials. I am also planing to write a tandem nursing post once I have figured it out a bit more. Check back in a few days to see if I actually managed to write those 😀