Yay! It’s that time of the year again 🙂 I was seeing relevant posts all around but somehow I was convinced I have posted about this “recently”, maybe it was European Breastfeeding Week or something? But nope! It was exactly one year ago that I celebrated breastfeeding my toddler, along with many other women around the world. This year I won’t write about the benefits of “extended” breastfeeding. You can read about those here. I just want to say how this relationship has evolved for our family. (Yes, it’s still going on!).

How our 2-year old breastfeeds

LM is now 2 years and 2 months old and she breastfeeds when she goes to bed at night, a couple of times during the night, some times when she wakes up and one more time, before her nap. She is no longer breastfeeding during the day or when we are out of the house. The “not outside the house” thing didn’t happen spontaneously. After she turned 18 months I felt she could wait a bit and would ask to nurse because she was thirsty, hungry or wanted a cuddle. So I offered those things instead and 9 times out of ten, she was satisfied. If not, I would still offer her to breastfeed. Nowadays she will only ask to breastfeed outside the house if she is extremely tired or has fallen down. And in that case, many times a cuddle and some water will do. I didn’t stop public breastfeeding because I felt uncomfortable, but because I was quite touched out and wanted my body for myself for a few hours per day. She didn’t protest and it did happened smoothly.

During those 2 year I have NEVER experienced a shaming incident and feel extremely lucky. Many moms who choose to breastfeed older children are actually being shamed still, be it dirty looks or even verbal abuse. This is unacceptable (as is any kind of abuse and shaming of course). The notion that women breastfeed their children in an attempt to draw attention to themselves or to provoke is just infuriating and absurd. Women who breastfeed their child, be it a newborn or a 4-year old, are responding to their child’s needs in the way that’s best for their family.

“When will you stop?”

After LM turned 1, I had many people -mainly relatives but also friends- ask me how much longer I was planning to breastfeed. Though I said I won’t talk about the benefits of “extended” breastfeeding, I do feel the need to talk once again about this, one year later. Here are a few things to think about, before you ask a mother how much she is planning to breastfeed her child: 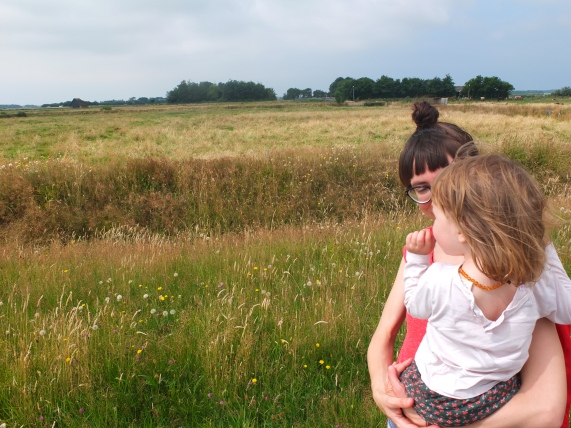 How does it feel?

And now for the cheesy part: I was a super-lucky mama from the start. LM has always been a breastfeeding champ and I never struggled with latching or sucking. Sure, I did end up with cabbage leaves in my bra once, but that was early days and even then I managed to stop that sneaky mastitis on it’s tracks. I love breastfeeding my girl. Her milky breath and the way she stares into my eyes when we snuggle together are memories I will cherish forever. She is now at an age that we can clearly communicate, which makes things even easier. She will respect it if one breast is painful and only feed from the other one. She will ask for milk using sweet words and not helpless cries. She will settle for hand-holding if I am too tired to feed her more. She now knows my body is mine and learns to respect my boundaries. That’s also a way to teach her that no one should disrespect her boundaries later on. Plus she breastfeeds her dolls (or I have to), which is beyond cute.

I feel the need to acknowledge that my partner has been an amazing breastfeeding advocate and supporter those two years, to the point that when I mentioned night weaning a few times I was just done, he said “I am on your side, you need to survive, but the thought of weaning just makes me so sad”. It takes a generous soul not be envious of the special bond that breastfeeding creates between mother and child. Of course, now that LM is a proper toddler, she and papa have their own very special rituals in the form of games, story-telling, music making and exploring, so breastfeeding is not taking anything away from their bond.

So that’s our breastfeeding journey so far 🙂 I would love to read yours in the comments!