As you know, Loulou Maya and me have been in Greece for a month. N was working so he joined us after the first 10 days. What follows is a series of some of the happiest memories of our holidays. Now that we are back home, posts will start coming up more regularly. Hope you had a great summer yourself!

At my maternal grandparents’ village house. Watching Loulou spending (even just a short) part of her summer where I spent months as a child was pretty moving. And the fact that my grandparents are still alive and well enough to enjoy their great-grandchild is pretty awesome too. 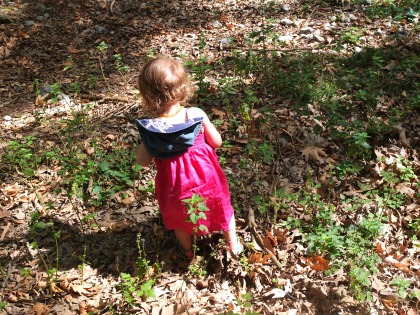 Some times things don’t go as planned and you find yourself trapped among stinging nettles.

The see is fun to swim in, but rivers have frogs and you can’t really beat that. 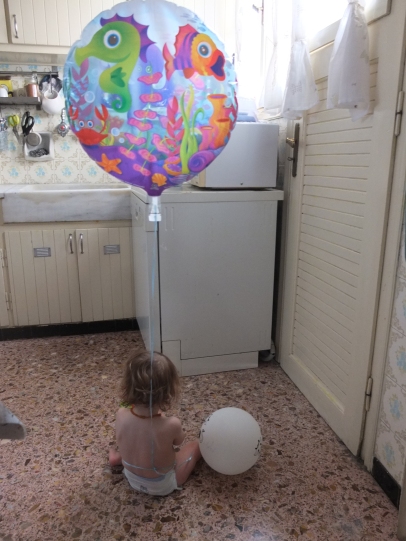 Some times toddlers are tricky to spot with all their hiding tricks and running away habits. Tying a balloon around their waist solves this.

The non-hip hippies teach their offspring to scout for food from a very young age. It’s a matter of survival.

We went for coffees. Well, we tried. Cause 9 times out of 10, the minute we sat down, she ran away.

Sunset walks on the beach

Trying out hair accessories (and pretty much hating it :/)

And there were some horses in the city as well… 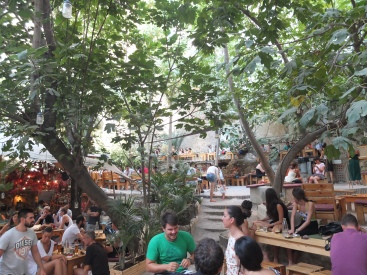 It was great to go for walks as a family again (my brother lives in Munich but came to spend 5 days with us. In the picture he can be seen walking next to my dad further away while LM, me and my mother walk at a somewhat slower pace due to LM’s tiny feet) 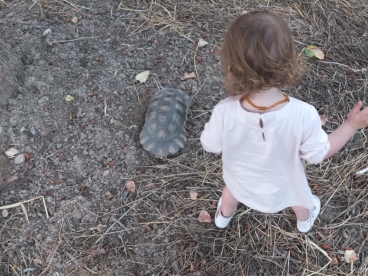 LM also got to see (and chase, and reach) a tortoise as well. She was pretty excited about it.

Those evil coin operated machines? Yup, we had fun with those too. LM’s grandfather seems more enthused than she does though. She did like Pocahontas, but the movement just wasn’t her thing.

We visited friends and ruined their homes too.

Loulou’s grandma (my mom) got matching shoes with her. Talk about dedication! 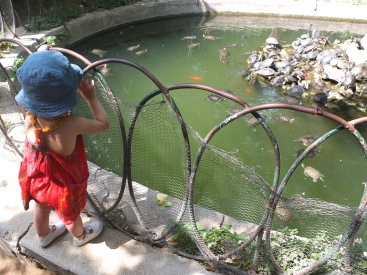 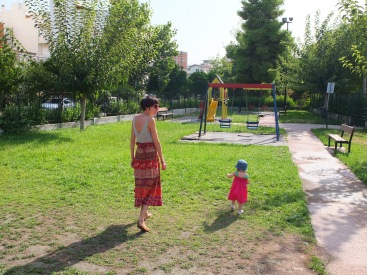 And we went to playgrounds as well.

P.S.: I have A TON of pictures of Loulou Maya laughing, throwing tantrums, swimming, “dancing”, climbing, rolling in dirt. And trust me, I would love to share the cuteness/weirdness with you.  However, we are trying to be a bit more careful and considerate in regards to her privacy as she grows up, so that’s why you only get to see her messy surf hair in these pics.