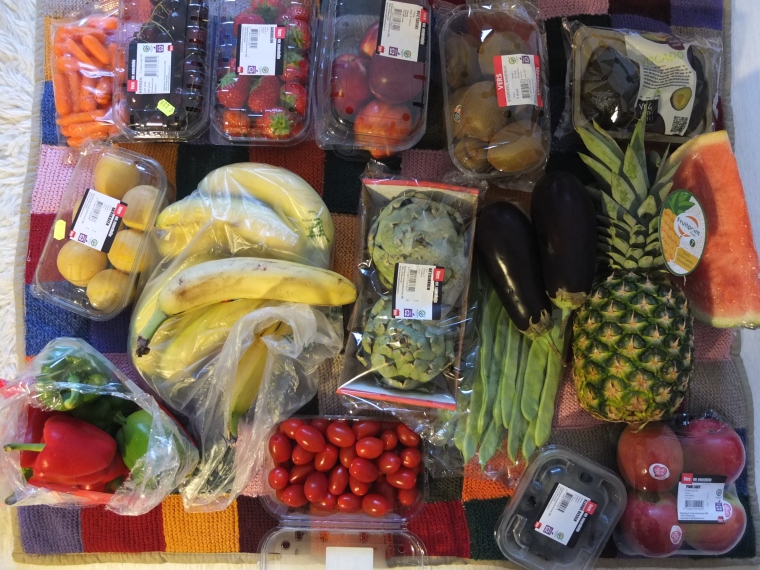 Whole foods for the win. Our groceries for the week.

Every time that I speak with my mother on the phone/skype, now that she is back in Greece, she asks me two things: “Do you drink water? Do you drink your fruit smoothies?” and goes on to reply by herself “I am sure you don’t!”. It doesn’t matter how much I insist that I actually DO those things. Now, it is true that the first few weeks with Loulou Maya, it wasn’t easy to cook proper food and eat fresh stuff and being tired all the time led both me and N. to sugar and caffeine over-consumption. As I have already written before, during my pregnancy we followed a vegetarian diet, which included cheese and eggs and even though cheese gave me quick energy fixes that lasted, we also over-did it. And one bad habit brought the other. That’s why N. decided to go back to a plant-based diet, in order to reboot his system. When you eat healthily, it is much easier to get rid of excess sugar and fat, without actually feeling deprived.

I personally find lists easier to follow, even though I think they are usually too rigid. In any case, this is the list of the steps we took in order to reboot our diet. You can keep the tips that you find useful and adjust them accordingly, based on your own lifestyle and diet choices.

Once you are done with your reboot and you feel fresh and energized, you can start re-introducing certain foods. For example, one coffee per day is not bad for you and it can actually be quite healthy, since it is loaded with antioxidants. Just make sure to stick to one and not go back to bad habits (as in drinking one pot instead of one mug). The reboot is not meant as the start of a deprived lifestyle, but as a way to remember what is healthy, which amounts are reasonable, which foods benefit your body and try to stick to those. And keep in mind that when you follow a generally healthy lifestyle, indulging occasionally in a sinful treat is even more enjoyable, while if you eat junk every day, you just feel like a garbage bag in the end.

Enough with the healthy eating preaching. Let’s talk about something more fun. The famous vegan banana ice cream. If you have been browsing vegan or plant-based diet websites, for sure you have come across that “one ingredient vegan ice cream”. The idea behind it is that you blend frozen bananas and it is supposed to have the texture of soft serve ice cream. You can add in peanut butter, vanilla and/or cocoa, to create even more flavors. I was just not sold. Until I was.

Here is N., proudly posing with his ice cream.

N. told me the other day that a friend sent him a recipe for vegan ice cream. I was pretty sure what it would be and I was right. That banana stuff again. But, the loving wife that I am, I decided to try it out, even though I was scared it would kill our blender. Still, I went ahead and froze 4 bananas, cut in slices. Fortunately (I guess) our freezer is not that strong, so the bananas froze but were not rock-solid. I blended two of them with one big spoonful unsweetened cocoa powder and 1/3 glass almond milk and the result looked like the picture. And it tasted amazing! We made another couple of servings just a few hours later. It tasted really like dairy ice cream and I am sure it will be fantastic with the vanilla added in there as well. So, if you are hesitant like me, don’t be! I mean, I am not even a banana fan, but this thing does not taste like bananas! Enjoy 🙂 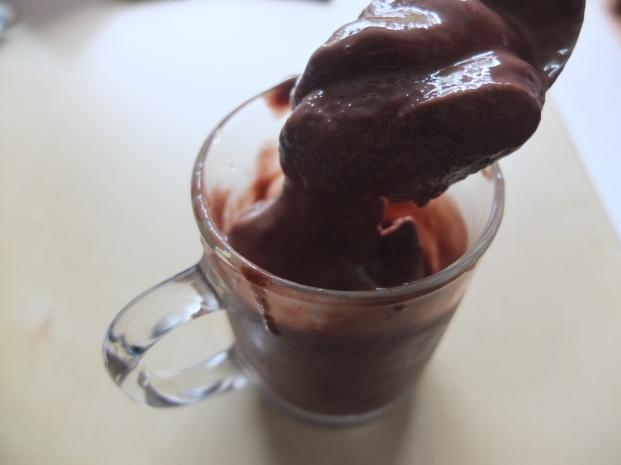