Yes, I know I haven’t written a post in a long time BUT I am sure you will excuse my absence, once you see what I have been busy with 🙂 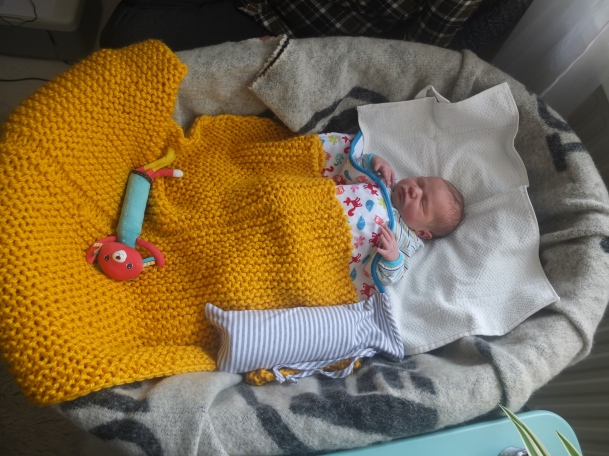 So, that is Loulou Maya. She was born the 1st of June, at 22:40, weighing 3500 grams and being 49 cm long. This is all you need to know. If you keep reading, there will be the gory details of her birth story (with a very happy ending though), so be warned.

I started having irregular contractions Saturday night. By Sunday morning they were 8 minutes apart and by Sunday afternoon, around 16:00, they were regular enough for the midwife to ask me to go to the hospital. She was also not sure if I had lost my amniotic fluid without realizing it or not. We were at the hospital within half an hour. My waters were still there, so they broke them. Me and N. had written an excellent birth plan that stated that we want a natural child birth without epidural or other pain medication, if possible, and that I would ask if I needed something. So as the contractions got stronger, no one offered me anything. I coped pretty well, being on all fours and with deep breathing. The tiny bit of yoga that I have done in my life did indeed help.

That is when we arrived at the hospital and I foolishly thought I was in pain. (I had no clue what REAL pain feels like back then :D)

I was dilating pretty quickly, everyone was happy, I was taking my deep breaths and the midwives asked for the baby clothes and put the baby cot next to my bed, so we all thought the time was near. Well, guess what? Things didn’t go quite as planned.

At about 7 cm I was not progressing at all and I was hurting more and more. The midwives checked the position of the baby with an echo and found out that little Loulou had decided to turn her chin upwards. And she had her legs in front of her face as well. That was the first time they mentioned a vacuum birth or an emergency c-section. By that point I was already exhausted, trying to stay calm despite the pain with no meds and I felt that it would be so unfair to go through all this and still end up with an epidural. Now, I want to take a moment here and say that I don’t think any birth is better than the other. The reason I was so against drugs, is because my mother had two very easy easy births, but she still had issues breastfeeding and as epidurals and sections can cause breastfeeding issues, I wanted to give Loulou the best chances I could.

The midwives told me that my birth could no longer be classified as uncomplicated, due to Loulou’s position and that a gynecologist with a level 2 midwife would take over. By that point I had tried all sorts of things to naturally change her position, from standing under the shower to being on all fours, to laying on my side, so we knew she would just not turn on her own. When the doctor came, they inserted all sorts of monitoring devices and catheters and stuff that I don’t want to talk about. They found out that Loulou was doing great and my contractions were strong, so giving me a drug to make the contractions stronger would not make things easier. She mentioned the c-section again, but said she would try to help me avoid it.

She was a-ma-zing. Yes, she had her hands in me up to her elbow (that’s how it felt, at least) but she managed to help Loulou get into the right position and at some point they told me to get ready to push. No vacuums in sight. I was thrilled. As thrilled as I could be at this point of course. I was more exhausted, swollen, is tons of pain and bleeding. But still, thrilled. I was not as happy when the episiotomy scissors made their appearance, but I knew it had to be done. And the midwife sewed me up nicely, so I was lucky in that respect as well.

And then, after 40 minutes of crazy intense pushing, Loulou came into this world screaming.

We stayed at the hospital overnight, because she had inhaled some meconium and they wanted to make sure she had no breathing issues. I have to say that I am more than happy with the care we got at the Vlietland hospital in Schiedam. Everyone was friendly, supportive and they spoke English during the whole procedure.

Now we are back home, trying to figure out the new normal and falling more and more in love with her every day.

We are a family of three now 🙂

*You can check out all the “Family and Parenting” posts here*