I know I haven’t blogged for a while, but life happens and I can’t always keep up. Fortunately, it is mostly good things that happen, so I can’t really complain.

In less than one month my best friend here in NL is defending her PhD thesis. I was supposed to be a paranymph but then all bureaucratic hell broke loose and she will end up presenting two months later than expected, which means I will be ready to pop. Fortunately, N. will be a paranymph in my place and I got involved by designing her thesis book (we get the printing sample tomorrow, so keep your fingers crossed!). I also had to work for a couple of freelance projects, which I really enjoyed, but took a lot of my time.

We are preparing for the Little One’s arrival, meaning that we have to shop this and that and make sure we got everything ready by 37 weeks, in case she decides to make an early appearance (which I hope not, because that’s just one day after my friend’s PhD defense and I will miss the big party the following weekend). Regarding the arrival of the Little One, as you already know our Confident Birth course got canceled, but we were lucky in the end, as Sophie, the lovely doula that gives the courses, offered us a private course at the comfort of our own home. I don’t know whether it will prove to be useful or not, but it did contain a lot of interesting info and things to think about.

So, with all that going on, there wasn’t much time for recipes. I will, however, provide you with some of my (traditionally ugly) pictures and give you some ideas of things to cook. I hope you will feel inspired to spend some time in the kitchen. 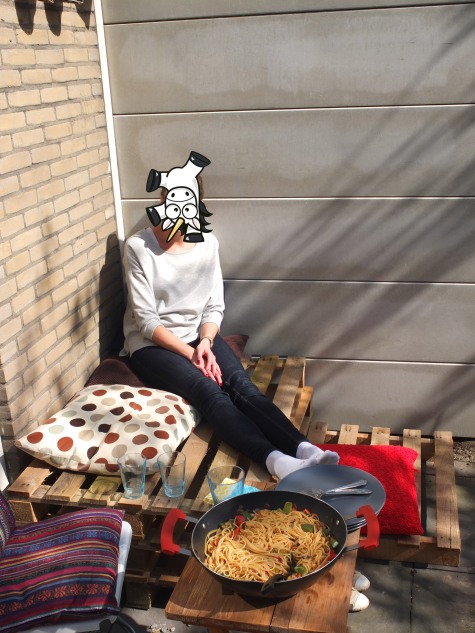 I am not sure M. wants her face all over the internet, so I put a little unicorn on top of her face. We love unicorns.

One of the best meals of the last week was this simple vegetable pasta, that we enjoyed with M. and N. in the garden. It was basically whole grain spaghetti with bell peppers, mushrooms, soy cooking cream and a few saffron strands. Since we were working on her book layout, we wanted something relatively light, so that we wouldn’t need a two-hour nap to digest after lunch.

Sushi rice burgers, marinated in a bit of soy sauce.

And a “raw” (not fried) sushi rice patty.

As you probably remember from my last posts, I have fallen in love with sushi rice and its great potential. This week I turned it into burger patties. I just mixed sushi rice with spinach and sweet corn, dipped it in soy sauce and fried for a couple of minutes. We ate it with a generous amount of home-made humus, mixed green salad and cherry tomatoes.

Radishes ready to get roasted.

You just cut them in half and brush them with a bit of olive oil and lemon juice. 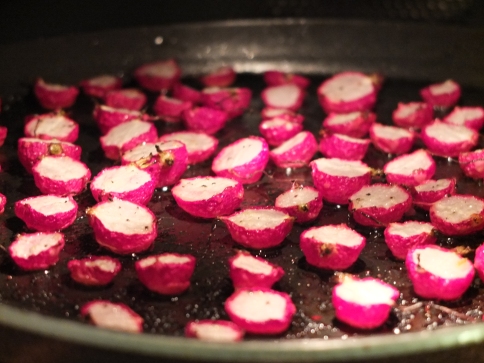 Ta-dah! Ready! They shrink quite a bit, as you can see.

I love all vegetables when they are roasted and radishes were no exception. If you have never tried this before, do try it! The recipes called for some honey as well but I left it out and they still turned out pretty tasty. 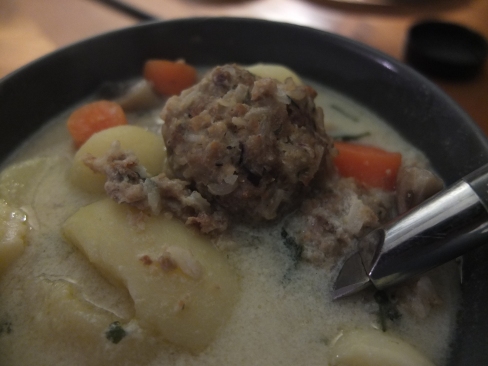 These turned out unexpectedly great.

Giouvearelakia are a traditional Greek food. They are basically rice-and meat-balls that float in an egg-lemon sauce. I found on line a recipe to veganize them. Unfortunately it is in Greek, but here it is for those of you who do speak the language. Basically, the idea is that instead of regular meat, you use soy meat. You add in the minced “meat” onions and parsley and you form little meatballs. You bake them in the oven for half and hour and then you carefully put them in the pot, where your vegetables have been boiling. I used potatoes, carrots and mushrooms for the vegetables stew. Then you add the egg-lemon sauce in the stew and simmer for a couple of minutes. And you can substitute the egg in the egg-lemon sauce with flour, which makes this recipe vegan-friendly!

That was all for now. Stay tuned, as I have arranged two interviews with two lovely ladies. I should have sent them the questions ages ago, but as I said, life happens. It will be worth it once they are published though, I promise!