What exactly is the winter solstice?

In short, it is the shortest day of the year. Of course the day still has 24 hours, but there is sunlight only for approximately 7 hours and 50 minutes (in most European countries). This year the winter solstice was yesterday, the 21st of December.  Some years (like 2015) it will be on the 22nd. Many ancient religions, druids and pagans (an umbrella term including many polytheist, nature-based religions) have been celebrating winter solstice for ages, before Christianity introduced the concept of Christmas. Now, I am not going to go all Zeitgeist on you, I will just mention that many maaaany maaaaaany thousands of years before Christianity, there was a god, the Sun, that died on the winter solstice and was reborn three days later, stronger. That’s when people believed that the Sun was strong enough to start bringing bigger, warmer days and eventually, the beginning of spring.

Ok, and why are you guys wishing us Happy Winter Solstice? Aren’t you Christians?

Well, that is a tough one to answer, but obviously if I wasn’t ready to answer it, I wouldn’t be writing this post. Nope, we are not Christians. In fact, when it comes to the core of the non-hip hippies, one of us is an atheist and the other (me) firmly believes that nature and the universe are way to awesome to not include some sort of metaphysical awesomeness. Okay, maybe not unicorns but tree spirits? Mother Gaia? That sort of stuff. I find it really hard to commit to one faith/religion/dogma, but I find myself drawn to the basic principles of paganism, which basically is “An it harm none do what ye will“. You can find the long version of the wiccan rede here. I personally find it a great guide to live by, mixed with some ancient traditions and folklore, which appeals to me. Plus there is both a male and female aspect of the divine, which are both equal. And I find that this reflects the physical world much better than one god, always depicted as male.

Wait a minute! You just said “wiccan rede”. Are you a witch?

Here is me being all witchy with my tarot cards.

No, because we cannot have a black cat at the moment and the rabbit and the hedgehog do not qualify as familiars. All joking aside, as I do not feel I am entitled to educate anyone about the different forms of paganism, including wicca, I will just say the two things that I consider the most important: one, wicca is about doing good and the rede (the “rules”) forbids black magic anyway (in case you believe in that sort of stuff). And two, yes, I am a witch and you are too, because we all have our daily little rituals, be it saying a prayer, cooking food for our loved ones with intention or wishing someone “good luck”. Even if you are a Christian, the candle lighting in church and the prayers and the making of golden talismans -so popular in the Orthodox church- could all very well be described as magical rituals. I am not saying this to upset anyone. On the contrary I am saying this to demystify paganism.

So you are a pagan of some sort. But your partner is an atheist. Is he fine with celebrating these crazy ancient holidays?

Yes, because he believes in science and it is a fact that winter solstice is the shortest day of the year. And it is a fact that seasons change and this affects all living things. He just does not attach any supernatural notion to all that. Also, he is an awesome person that accepts others and keeps an open mind. That’s why he got me this awesome yule (=the ancient name of Christmas, coming from the even more ancient Scandinavian word for winter solstice) present:

Palo Santo incense and healing crystals. Or just beautiful minerals, if you don’t believe in that sort of stuff.

Phewww. Now that this is all finally out of the way, I can go on to describe you how we celebrated the winter solstice. We started our day with homemade lemon muffins and those Yule carols. Then, the plan was to go out and enjoy vegan cupcakes, but by the time we were ready, we got hungry, so we headed to Spirit first.

Courgette soup, vegan lasagna and some other stuff that I do not remember for N.

After Spirit, we headed to Heavenly Cupcakes. We were lucky and it was almost empty, so we could sit there and enjoy our cake and coffee. 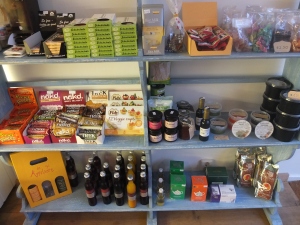 That’s where they keep all the cavi-art. 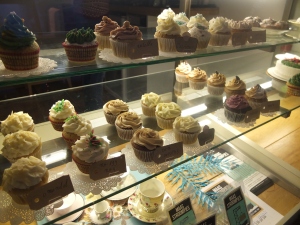 My “nutela” cupcake and coffee.

On the way home the metro stopped in an in-between station because of some sort of accident, so we were left in the middle of nowhere. We had two choices: stand there and freeze until a bus showed up to take us somewhere, hopefully close to Schiedam, or walk. N. had the genius idea to turn on the gps and walk towards home, until we find a tram. And that’s what we did. Best night walk ever! 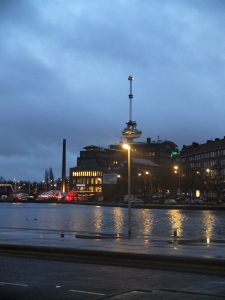 Outside the Coolhaven metro station.

Somewhere between R’dam and Schiedam.

We walked for half and hour and then took a tram home. There we decided to do something creative, so we tried to make two paintings. It went to hell, but it was so much fun! We started out well, our paintings turned out looking quite decent and then we kept drawing and ended up destroying them. Very Yule-appropriate, if you ask me, with all the birth-death cycle involved.

N. with his painting, before it went downhill.

After the painting disaster -did I mention it was totally worth it?- N. played with some sort of music software and I played with my new crystals and cards. All in all, it was a great day and I think that celebrating the winter solstice will become a family tradition for us.

We wish you all happy holidays, no matter what you are -or are not- celebrating!