(I am quite sure that those titles of mine are never going to become more SEO-friendly. Well, I can live with that.)

First of all, Marry Something to all! Whether you are celebrating Christmas, you already celebrated Hanukkah or are about to celebrate Yule, enjoy the holidays! I know it is a bit early for holiday wishes, but since I am not sure I will be posting throughout the holidays, I thought that a few wishes ahead of time wouldn’t hurt. And if you belong to those people who feel depressed during the holidays, you are totally normal. Go check out this article for some tips on how to cope.

Today was a good day. I went to Heavenly Cupcakes in Rotterdam with the same lady that introduced me to Spirit. Oh the variety of vegan cupcakes… It really was heaven. I ended up ordering a cake with saffron and an awesome white frosting that was so big I good hardy finish it (of course, I persisted and managed to eat even the last crumb in the end). The place is really great and I think that about 15 people could sit there, but it is mostly a take-away. We were lucky and there was space for us to sit, so we enjoyed a coffee as well. The cupcake lady is very friendly and fun to talk with as well. In Heavenly cupcakes you can also find vegan cheese, vegan chocolate and even vegan caviar! 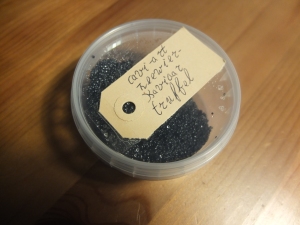 Cheaper than the “real” thing and it does actually taste great! The one I chose is seasoned with truffles but there was also a wasabi version a salmon version.

The other pleasant surprise was the vegan bacon that I found at Albert Hijn. I have not cooked it yet, but it is soy-free and I was told that if it is fried a bit in coconut oil, it tastes really close to real bacon, minus the cruelty. It is made out of vegetables and pea protein, which makes it ideal for people with soy allergies.

Mr. Fthogos is having a hard time and it seems he is just too old to fully recover. He has been getting his painkillers and antibiotics for a week now and needs to keep taking them for one more week, before another visit to the vet. But he also has cataract on his left eye (the same side that his leg is swollen. Not his good side), which is another indication of old age. As he is a rescue, we could never be sure for his age, so he might be a bit older than we initially thought, considering the type of health issues that he has. In any case, we love him to pieces and we will make sure that he is as comfortable as possible.

I don’t know if any of you ever explore the side bar of The non-hip hippies, but if you do, you have probably seen a link to Τα Νέα του Βελγίου. I love this website, because it is full of diverse and unusual content and it really is unlike anything else I have read in the Greek blog-sphere. You can find articles about culture, music and book reviews, original short stories and poems, articles on TV shows and sports. Each writer has their own distinct writing style, which is one of the charming features of TNTB. The fact that I personally know most of the writers and really like them is not blurring my judgment, trust me! So if you speak Greek, go have a look. And if you do, you will see that they featured the first e-book of The non-hip hippies.  Jorn Hammerat wrote a post about creative efforts by individuals and small groups and created a not-so-consumerist list for Christmas gifts. You get awesome stuff and support awesome people too (and I am not talking about myself here, but about the other wonderful people featured)!

And of course, food.

You know me. I love food. So this post is also going to include a super simple pasta sauce recipe. Here you go.

Extra tip: Always keep a cup of the water that you cooked the pasta in, so that you can adjust the thickness of your sauce. The starch in this water helps to bind the sauce.

Same pasta, different plate, just because the sun came out.