The last surviving piece of the cake (it lasted less than 24 hours).

In this house we are trying to consume as many fruits and vegetables as we can. We found that fruit smoothies were a great way to do so and went through a phase of drinking one or two of those every day. We loaded them with almond milk, bananas and tons of berries, for all the antioxidants. We chose different berries every time, which finally led us to fresh cranberries. I have never eater fresh cranberries before, as they are quite sour. My mother told me the other day that she adds them to salads and it sounds like a nice idea. They were great is smoothies too. We finished a bag and bought a second one, but somehow the smoothies phase was over and I could see them getting slightly “tired” in the fridge. So I decided to use them in a cake instead.

Remember to use unprocessed, raw sugar, as white sugar is processed with bone char, therefore not vegan. If you are not vegan, use whatever sugar you want.

Yes, I did not remember to take a picture while it was whole. But you get the idea. 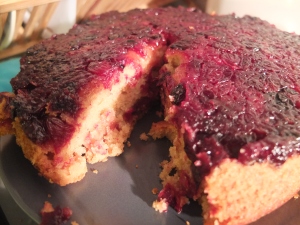 I think I am just going to make another one asap.

This basic cake recipe is easy to play around with. I did another up side-down cake the day after. I put apples instead of cranberries at the bottom, I removed the lemon, added 3/4 cup of ground almonds and walnuts, cinnamon, clove and nutmeg. It turned out great as well, but didn’t look so good, because half the apples got stuck in the baking form. Still, it tasted great.

We have an African pygmy hedgehog. We ‘ve had him since February 2011 and rescued him from a farm somewhere in North Holland. He is now a bit more than middle-aged (they live an average of 5 years) and had a huge issue with his front left leg. So we took him to the vet, who told us that things look nasty, he has a very serious infection, his bone is almost broken and it looks like he will never walk again like he used to. So now the game plan is to give him antibiotics and painkiller for two weeks, see how that works and either continue with a new treatment or consider amputation, which is horrible and also has a huge risk for his life, since such tiny creatures often do not wake up after surgery.

In order to give him medication in the past,  I would just put it on his food. But since the infection is in such a place that it is hard to get a high enough concentration of antibiotics through the blood flow, I want to make sure that he takes all of it and none is left uneaten. So I am giving him his two meds with two measuring syringes. And here is how to do it.

The average time to medicate a (our) African pygmy hedgehog is about 15 minutes, if you are lucky. If you are not lucky and he pees on you, add the changing time and laundry time.

On a side note, for those of you that are looking for pregnancy updates: we had the 16 week appointment yesterday and listened to the baby’s heart beat for the first time. Quite moving.