I first found out about Everyone Is Gay when one of my close friends came out to me after being friends for quite a long time. At the time I was startled and could not figure out what took them so long, especially since they knew my love for them was the size of  mountain Everest. So I was searching about all sorts of “gay stuff” online, reading through gay fora and psychology articles and the like.

And then I found a youtube video of Danielle and Kristin. They were lip-syncing and giving great advice to (mostly) gay teenagers and young adults. I watched tons of their videos the following days and I laughed and cried A LOT. I was moved by the stories of all those kids, having to deal with conservative parents, awful “friends”, hard relationships. But what I found most moving was the approach of Danielle and Kristin and the way they presented their advice. Non-judgmental, using their own experiences and showing their emotions, they made me waste so many hours on their channel at a time that I had deadlines chasing me every other day. No regrets!

Today you are lucky enough to read some of Danielle’s wisdom. Enjoy!

1.Danielle, you have a background in theater and you also studied improvisation and comedy. Apart from all the fun that this puts into your videos with Kristin, does it help to deal with your own bad days in everyday life?

Certainly! I have a rather positive outlook on life in general, but being able to see the humor in almost any situation has definitely helped.

2.Everyone is Gay started out as an advise blog and vlog but since 2011 you have also started visiting schools and colleges and educating students about sexuality and gender equality. Did your decision have something to do with the increased rate of teenage suicide attempts?

It absolutely did. In 2010 right after the It Gets Better Project started up, we wanted to do more and we didn’t know what to do, so we asked our readers “what can we do for you” and they almost unanimously told us “come to our schools.” So, we figured it out (with a lot of help) and made it happen.

3.“Everyone is Gay”. I imagine that it is all about everyone being different from each other, but at the same time everyone being equal. Why is it so hard for people to understand that? I can understand that religion has played an important role and nourished the conservative attitude of previous generations. But why is there still bullying in schools in 2013? Why is sexism not history yet?

Everything is a process, we can’t expect immediate reform overnight, that just isn’t realistic. If you look at where our society was 50 years ago, we’ve made some pretty incredible strides. If you look at where we were just two years ago, things are VASTLY different. We try to focus on the good that HAS happened because of the hard work put in, rather than focus on the good that HAS YET to happen.

4.Was coming out to your own family and friends particularly hard? Any advice for teenagers who still live with their parents and decided to come out to them and the whole thing went to hell? How can you deal with all the yelling and shouting and tears, if you have to live with your family and they do not respect you?

My dad was very supportive, which helped a lot. My mom wasn’t totally okay, but we were having our own problems separate from me coming out of the closet, so it was kind of the tip of the iceberg. I think it’s important to find just one person you can confide in and focus on their support. A lot of times we get caught up in the negative and we think “well, my friends are great, my sister is great, but my mom is the worst and because she doesn’t get it I feel worthless,” but you’ll be able to get to a more positive place if you focus on those who are treating you right. Always be open to dialogue and try not to fight fire with fire. Nothing gets accomplished when two people are screaming at one another, but sometimes you can get to a place of understanding if you have a calm conversation. Also, realize that it’s a process for them as much as it was for you. You didn’t wake up and all of a sudden think “I AM GAY AND I’M COOL WITH IT WHATEVER,” it was a process. It will be for everyone involved, so allow time to do a little bit of the work for you.

5.You seem to be a great team with Kristin. How important are “teams” to you, to overcome life’s difficulties? I know that without my partner and best friends I would not be able to handle some rough days. 6.In 2012 a study that took place in Norway and Sweden in 2006 started circulating online. It found that lesbian marriages are much more likely to end than marriages between gay men or men and women. Human relationships are certainly really hard, no matter what the genders involved, and it takes work to make them last. But do you think that relationships where two women are involved are really harder? And if so, why?

I honestly don’t think a persons gender matters in a relationship. I think they’re all hard and they all take work.

7.Why do you think so many people feel threatened by gay marriage? It was a shocker for me seeing all the anti-gay demonstrations in France, a country that has been traditionally all about human rights.

People grow up with certain beliefs and spend their entire lives not being challenged. So, when something happens that pushes them out of their comfort zone, they lash out. People are afraid of things that are different from them or that they don’t understand. It’s pretty unsettling, but all we can do is focus on the positive and try to make those changes! Hopefully something will get through to those who don’t agree.

8.Danielle, how do you see Everyone is Gay in 10 years from now? Will there no longer be a need for its existence and you and Kristin will be knitting surrounded by cats and Italian ice cream? Will you abandon Kristin and do a solo career as Justin Bieber?

Haha! Who knows what’s in store for us! We’re working on a book right now, we’re building a curriculum for middle school & high schools, we’re taking steps toward having 501c3 non-profit status, we’re applying for grants, we have some advice on other sites, doing a small project with MTV. We have a lot going on and all good things, I’m looking forward to the future! 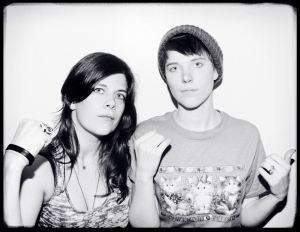